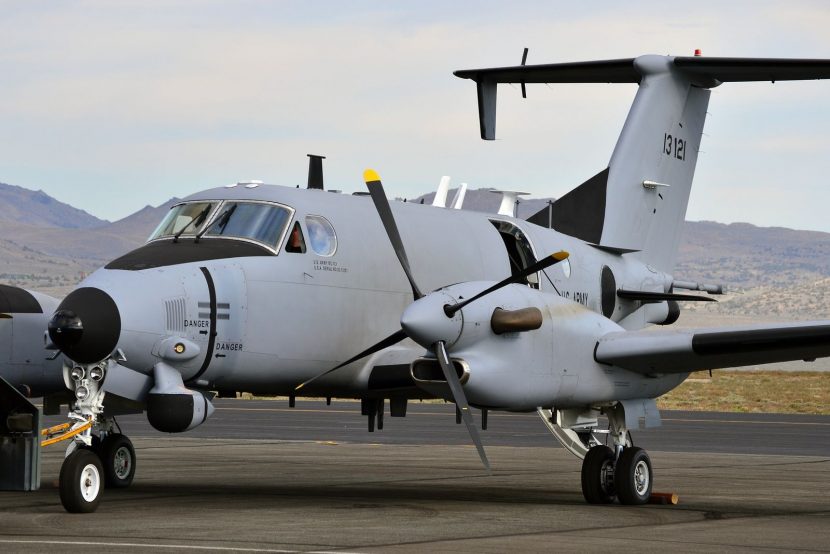 The U.S. Army is closing in on a replacement for its aging Guardrail turboprop aircraft that provides intelligence, surveillance and reconnaissance with a faster, more capable jet.

The service has significant obsolescence problems with its current fleet of Cold War-era Guardrail Common Sensor ISR aircraft deployed in both South Korea and Europe. The Army has reached a point where it is pulling parts from the boneyard to keep the aircraft operational.

The Army is expected to soon decide on whether to move forward with a program it is calling HADES, or the High Accuracy Detection and Exploitation System.

The service has not publicly announced plans to move forward on the program, but Army staff recently told Congress that fixed-wing ISR remains an important organic capability and that HADES would bring more capability to the force.

For the Army to determine what HADES might look like, it is flying two demonstrator aircraft. The goal is to get the requirements right, to make sure it’s providing the required capability.

Artemis — or Aerial Reconnaissance and Targeting Exploitation Multi-Mission Intelligence System — has flown in the European theater for more than a year and has logged more than 2,000 flight hours and counting. Artemis did deploy to the Pacific prior to its European tour for a short period.

The Army awarded a contract to HII, and the company awarded a subcontract to Leidos in November 2019 to build Artemis using a Bombardier Challenger 650 jet.

The plane participated in Defender Europe, a division-sized exercise designed to test the service’s ability to deliver a force from the U.S. to Europe. Artemis has continued to deploy to operational areas throughout the continent.

The other demonstrator aircraft, dubbed Ares — or Airborne Reconnaissance and Electronic Warfare System — deployed to the Pacific on April 18 and had so far flown roughly 130 hours in support of local missions as of mid-May, DeBoer said.

Ares is a bigger platform than Artemis, and it provides the Army longer ranges and higher altitudes — key capabilities for the Pacific region. According to unclassified data, the aircraft has a 5,500-mile range and can fly at 51,000 feet for about 12.5 hours.

A larger aircraft also means payloads can be larger, more powerful and more capable, and electrical generation on the aircraft is greater, DeBoer said.

The sensor packages on Artemis and Ares differ, but both have electronic, communications and signals intelligence sensors.