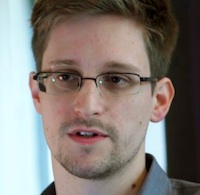 Snowden is one of 75 foreign citizens listed by the decree as being granted Russian citizenship. The decree was published on an official government website.

Snowden, a former contractor with the U.S. National Security Agency, has been living in Russia since 2013 to escape prosecution in the U.S. after leaking classified documents detailing government surveillance programs.

He was granted permanent Russian residency in 2020 and said at the time that he planned to apply for Russian citizenship without renouncing his U.S. citizenship.