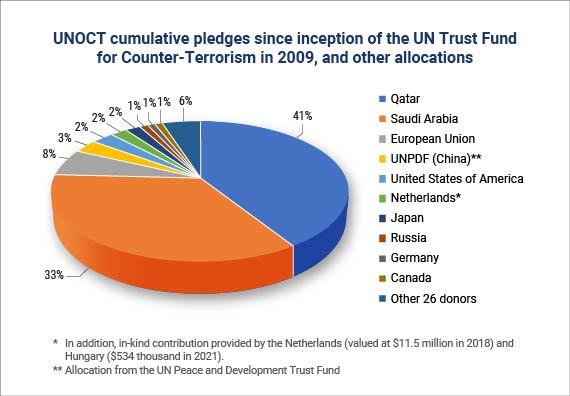 With approximately 3% of the Office’s annual budget coming from the UN Regular Program Budget, UNOCT relies on the generous contributions of donors to the United Nations Trust Fund for Counter-Terrorism to finance its critical counter-terrorism activities and initiatives in support of and as requested by Member States.

Qatar has been the top contributor since the fund inception with $137,770,000. This amount represents over 40% of the total amount contributed globally by members.

The United Nations Trust Fund for Counter-Terrorism was created by the Secretary-General in 2009 under DPA and transferred to UNOCT in June 2017 upon its establishment following General Assembly resolution 71/291. UNOCT also receives allocations from the United Nations Peace and Development Trust Fund managed by the Executive Office of the Secretary-General (funded by the Government of the People’s Republic of China).

Voluntary contributions allow UNOCT to provide technical assistance and capacity building support to Member States through global, regional and national projects around the world delivered by the United Nations Counter-Terrorism Centre (UNCCT) and the Special Projects and Innovation Branch (SPIB), as well as the policy, planning, monitoring and evaluation. UNOCT programs and projects integrate gender and human right considerations and are often implemented jointly with Counter-Terrorism Coordination Compact entities.